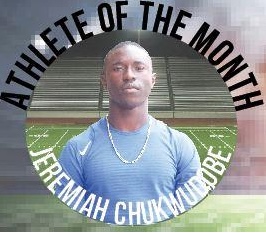 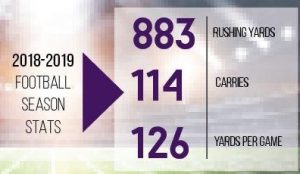 Switching from basketball to football at the age of 10, Chukwudobe set his eyes on competing at the collegiate level and reaching the NFL.

As a first generation American, senior Jeremiah Chukwudobe doesn’t take any opportunity for granted. That is why he has set his ambitions high, with his family and faith motivating him to work hard in his football career.

What started out as a way to let out aggressive energy has now turned into a goal of playing in the NFL.

“My parents worked really hard to provide food and clothes for my siblings and I. I feel it’s really important to support them and my extended family still in Nigeria. That’s a big reason why I want to make it to the NFL,” Chukwudobe said.

Initially a basketball player, Chukwudobe had to do some convincing before he was allowed to step into the world of football. After fouling too many kids in basketball, his parents finally agreed to let him branch out in another contact sport where scrambling after the opponent was more encouraged. He began playing football at age 10, and his love for the game was fueled by watching his favorite professional teams on television. Chukwudobe has taken inspiration from former NFL stars Ray Lewis and Barry Sanders.

“I model my game after Barry Sanders and I wear number 20 because of him. I love watching him play and I watch his highlights before every game I play,” Chukwudobe said. “Players like Ray Lewis are so hardworking and not only inspire others but put fear in their opponents through the way he played.”

Serving as Diamond Bar High School’s star running back, Chukwudobe has worked his way up from earning MVP and offensive player of the year awards from past coaches his freshman and sophomore years, to winning the Palomares All League Award his junior year.

“I’ve had three different coaches throughout these four years of playing but I feel that has only helped me to improve as player even more,” Chukwudobe said. “Having to adapt to different playbooks, coaching styles, systems and running different offences has really been a blessing.”

Nicknamed “Shifty” by his teammates for his quick feet on the field, Chukwudobe has averaged 108 rushing yards per game and scored 9 touchdowns. Not only has Chukwudobe been able to perform on the field but has also helped lift up his team in other aspects as well. Head coach Jeff Reitz compared Chukwudobe to a 2005 NFL MVP he once coached named Shaun Alexander, claiming they both helped put together the dynamic of a team by demonstrating leadership while still being able to have fun.

“Chukwudobe is a coach’s dream,” Reitz said. “What an unbelievably respectful, nice and defined out, super funny guy…I have been coaching for 36 years on just about every level and have only come across maybe two or three other running backs that are like him.”

Reitz also expressed his faith that Chukwudobe already has the personality to make it to the NFL if he gets stronger and stays healthy.

“Running back is a hard position and he just might be one of those guys who end up making it,” Reitz said. “And until then he’s going to have fun doing it.”

Currently undergoing the recruitment process, Chukwudobe is talking to Yale and UC Davis and has received offers from New Mexico University, Davidson and Beloit College.