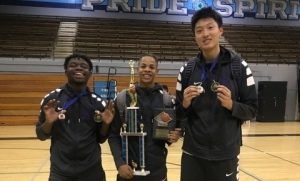 Congratulations to our Boys Basketball team for winning the Azusa High School Tournament Thursday, December 13. This is the third straight tournament the boys have been in the Championship game. Diamond Bar beat Ayala, 68-41, to capture their 2nd tournament championship. A couple weeks ago, the Brahmas won the San Dimas Tournament with a great win over Los Osos, 55-43.

Mt. Baldy League play begins on Tuesday, December 18, against Chino. All girls basketball teams will be playing at home. The boys teams will be traveling to Chino.

Friday, December 21st, the boys will host Ontario for the Mt Baldy Home League Opener. Don’t miss out! Girls will be at Ontario High School. All Varsity Games start at 6:30 P.M.