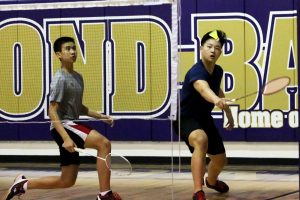 Our BADMINTON TEAM travelled to Cerritos for a semi-final match against the 4th seeded Dons. The Brahmas earned a record setting 10th consecutive trip to the championship game with a convincing 19-2 victory over Cerritos.

Noteworthy performances – Captain Mirabelle Huang claimed four points. She won in mixed doubles with Codey Ma in one game and Owen Che in the second game. She paired with Teri Ng to win both points in Women’s Doubles.

The Brahmas will travel to Arcadia High School for the championship match on Saturday, May 11th. The match will start at 2 pm.